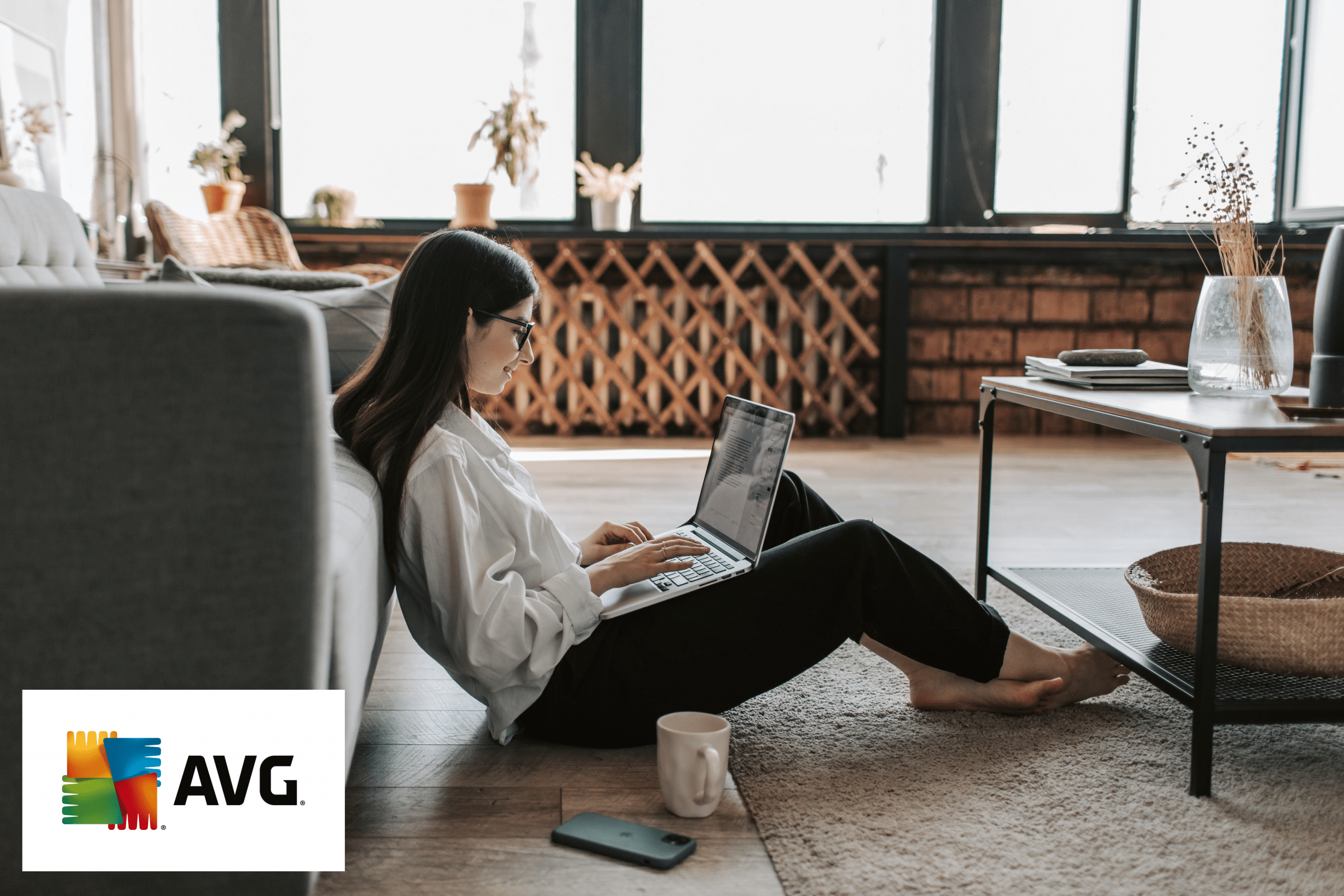 But is AVG enough? We wouldn't know until we tried it ourselves. What we have here is a straight-to-the-point AVG Antivirus review that can help you determine whether you should rely on it for protecting your computer or not.  In a nutshell, it's a great security software, though there may be better options, depending on your needs.

AVG Antivirus can be an excellent choice for most internet users. Yet, for business owners or anyone who works, your computer(s) will stay at a slight risk; even if it's a fraction of a risk, it's still present. More about business antivirus protection in this post.

Avast and Windows Defender are often considered to be the closest competitors to AVG. Check out how AVG fairs against them:

With so many antivirus products in the market, there is none that’s like McAfee. With over 18.9 billion devices protected on a consistent basis, McAfee’s ability to deal with malware attacks come unmatched! McAfee has a dedicated database that is adept to deal with all sorts of virus attacks whether they may be online or offline. To browse their programs, check out their programs here!

AVG Antivirus is packed with decades worth of research and development. Starting off our AVG review, let’s take a look at what this antivirus has to offer:

The AVG Antivirus free version may not be feature-packed, leaving many functions to its sibling, Avast. However, it's definitely a strong contender as a free antivirus suite. To compare features, you can check out Spectrum Security Suite, Plumbytes, and WiperSoft Antivirus review.

Since Avast bought AVG back in 2016, both antivirus programs have relied on the same antivirus protection engine. Avast decided to keep AVG as a separate program because it has its own fanbase and distinctive feel and features. Nevertheless, both suites perform similarly when it comes to malware protection.

AVG is available for Windows 7 all the way up to 10. AVG for Mac is also supported, but you only get a fraction of the features that the Windows version has. Furthermore, there's an AVG app for Android devices.

The AVG free antivirus scans your computer for prevalent malware. If a threat is detected, the target file is uploaded to AVG's servers for analysis and further actions. AVG uses the same malware protection employed by Avast.

The antivirus protects your computer from spyware and malicious websites. It also scans suspicious emails and blocks phishing attacks.

We've tested the malware protection engine AVG uses ourselves to see how it performs. Surprisingly, the antivirus was able to smash anything that comes in its way. AVG isn't known to have the most secure malware protection capabilities, but it definitely did well in our real-world test.

Moreover, the program comes with a file shredder that allows you to wipe out suspicious files permanently. 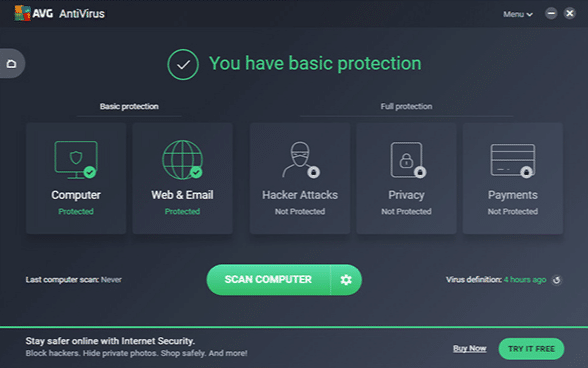 AV-Comparatives gave the program a score of 99.3%, meaning that the antivirus wasn't able to detect all the threats, but it was capable of removing the fair majority of them.

As for SE Labs, AVG received an AA rating, the 2nd best rating an antivirus can gain, their highest being the AAA certification. These results indicate that AVG wasn't able to block 100% of the threats and that at least a few attacks managed to penetrate the program's defenses.

The December 2019 results from the German lab AV-Test were more promising. According to the test, AVG Antivirus successfully detected 100% of the threats, including 0-day malware.

MRG-Effitas gave AVG a level 2 certification, an indicator that the antivirus failed to lock a few attacks.

Lab results are prone to fluctuations according to the testing techniques that each lab uses, which explains how the same antivirus can get different results from different labs.

Lab results for both AVG and Avast turned out to be quite similar, proving that both of them use the same antivirus protection engine.

Antivirus Scanner Is Always on in the Background

One of the best features of AVG Antivirus is its real-time scanner. You don't need to initiate a full system scan to detect malicious files and threats; the program does that for you in the background.

You can do both deep scans and quick scans. Once the AVG virus scan is complete, you'll be greeted with a list of actions that you can take to protect your data.

Furthermore, you can do a boot-up scan that allows you to detect threats before your computer initiates the OS. Some threats may be able to hijack your computer before it even boots up, and that's exactly where this feature comes handy.

AVG's firewall offers real-time protection against ransomware. Some other programs like Windows Defender protect from ransomware attacks by creating backups of your files in case the original ones get attacked. The problem with this approach is that it doesn't protect the privacy of your files, which can be a significant problem.

On the other hand, AVG actually blocks the attacks and prevents them from damaging your files in the first place. It protects your photos, files, and documents from getting encrypted, modified, or deleted.

Scam emails or phishing can be a dire problem. Phishing doesn't require a great deal of expertise to accomplish; almost anyone can craft a few scam emails, but it can be hard to detect, even by sophisticated antivirus systems.

Luckily, AVG scans your emails to detect potential frauds and scams. Once a threat is identified, the program will notify you immediately to prevent you from entering sensitive credentials. We found it quite accurate, catching even the least suspicious spam emails.

AVG used to offer a browser extension that lets you detect malicious websites and emails immediately, but the company pulled it for some reason. We hope that it comes back again sometime soon.

First-time users of AVG Antivirus system should find no problem getting used to its interface. The program is quite easy to use, and you can do almost anything you want with a few clicks, especially the scan options.

The software follows the graphic icons approach that allows you to differentiate between the features and functionalities seamlessly. You don't need a long time to acquaint yourself with the program and its menus.

If you ever get lost, you can always search in the help section, and you'll get a detailed answer to almost all of your questions and problems. AVG also works relentlessly on expanding its FAQ base, good news for starters. 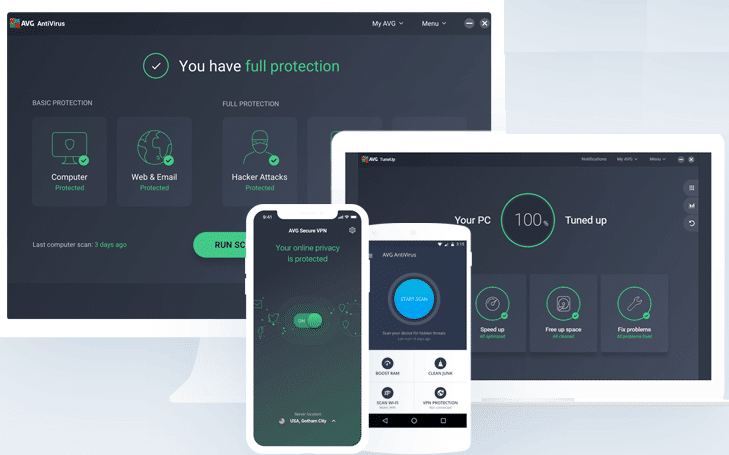 To measure the impact AVG has on performance, we ran a simple test that consists of opening two 20-sheet excel files simultaneously.

Before installing AVG, it took around 15 seconds for the files to load. After installing the program, the time it took to load the files increased to 18 seconds. That's a 17% drop in performance, which isn't that bad considering that some antivirus systems can drop the performance by up to 50%. But some other suites go as low as 3% when it comes to system impact.

We also tried to measure just how much AVG affects gaming performance. We tried gaming before and after installing the antivirus. The game we used in the test is GTA V.

Before installing AVG, we got a steady 60 fps in the game. After installing it, the fps dropped to 57. To some extent, installing AVG on your computer will result in a performance drop of 5%.

That's decent compared to other free antivirus systems, but it's not exactly industry-leading. With game mode enabled, the performance drop is capped at 3%.

At first glance, AVG’s interface looks quite neat and simple. Once you open the program, you'll be presented with 5 cards that give you an overview of your computer's status and how protected you are.

You can start a scan immediately with a click of a button at the bottom of the UI. You can also schedule scans at the time interval you want and select the directories that you want to scan.

Furthermore, the program allows you to set automatic recurring scans at fixed or variable times. This is much more convenient than having to initiate a scan amid your work manually.

Overall, we found the interface pretty easy to navigate, even for those with little-to-no experience with antivirus suites. 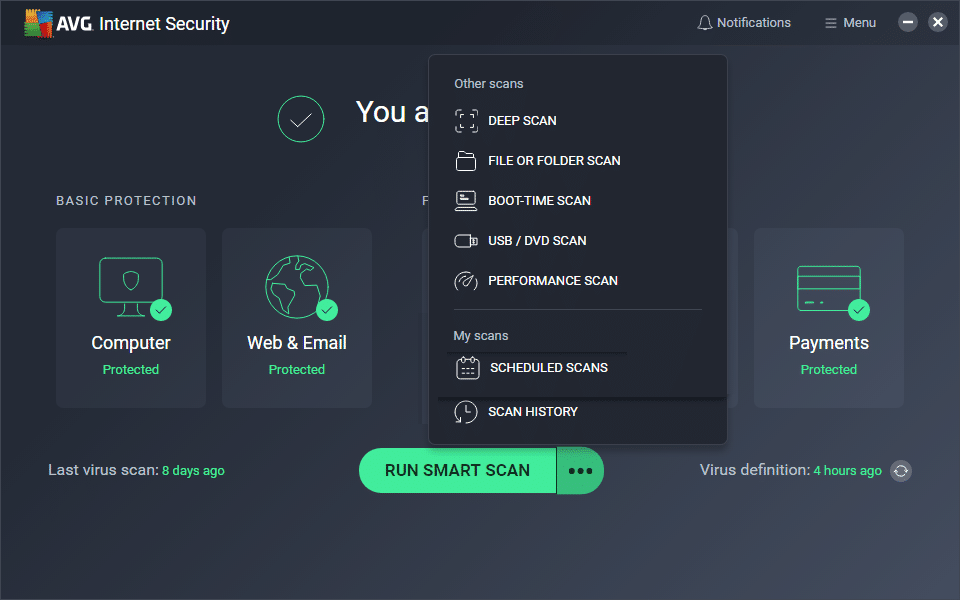 Installing AVG Antivirus is super simple. All you have to do is to download the 263KB installation file and go through the installation wizard. Then, it'll download the full-sized application. It should take less than 10 minutes to install AVG.

You don't need an AVG account to start using the software, but we recommend creating one since it gives you extra functionalities and monitoring capabilities.

There are two versions of AVG Antivirus: free and premium. Both versions are essentially the same when it comes to malware protection since they use the same virus signature database. However, the AVG Pro version offers extra features like improved ransomware and webcam protection.

However, at $70 per year, we don't think it's worth it. For most people, the free version is enough. Additionally, there's a 3rd version called AVG Ultimate, which is essentially the Internet Security package combined with AVG TuneUp. AVG TuneUp is an excellent tool that can improve your system's performance by wiping unnecessary files.

At the end of our AVG Antivirus review, my bottom line on AVG is that it’s a decent, all-around security system that can keep your computer protected most of the time, at least.

Sure, it may not have the most sophisticated malware protection out there. Still, for being a free antivirus, it definitely deserves some credit for its user-friendly interface and extra security features.

Although the product we talked about are notable in the market, it doesn’t come close to McAfee. McAfee is a leading antivirus company in the cybersecurity industry due to its unique line-up of programs catered to dealing with malware and antivirus attacks. No wonder over 18.9 billion devices are protected using McAfee! Check out their security programs here! 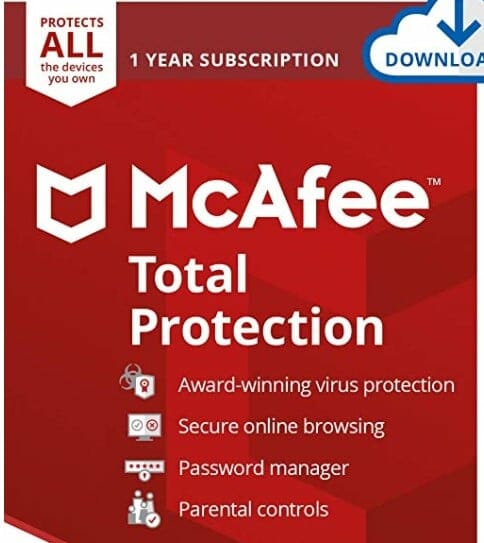