There are different types of monitor cables. The evolution of the monitor cable types began with the analog VGA cable, which only transmitted video signals. This industry has experienced change and improvement with the new cables coming with better features for improved monitor performance.

Among the features that have experienced significant improvement are the bandwidth range, latency levels, improved transfer speed, reverse compatibility, and many more. Monitor cables in the early days transmitted analog signals with low resolutions. Some of which only transmitted video signals. The more advanced modern ones transmit both digital video and audio signals. The likes of USB-C can even transmit power for charging.

With the increased popularity of LCD monitors, there has been an increased need for high-resolution monitor cables with a wide bandwidth range. You'll likely find several video interface port connectors on your monitor. But, do you know the correct cables for every port on your monitor?

Let's guide you on identifying the correct cables to connect to your computer monitor. Besides, we've simplified the hard tussle for you by listing each cable's key features and benefits. Read through for more.

What Are the Different Monitor Cable Types

The monitor cable types are listed below.

VGA is a display standard that uses analog technology to transmit a computer (source) signal to an external monitor.

Its output quality is low because VGA uses analog signals to transfer data. Its resolution also limits the VGA cable from displaying high-quality output. It is worth noting that the VGA cable only transmits video signals.

You can use the VGA connector to play video on your monitor. It allows you to stream video at 480 and 1080 pixels with the RGB signal.

We have the following types of VGA cables

The VGA cable is compatible with D-sub cable, which is a small electrical connector having a D-shaped shield. 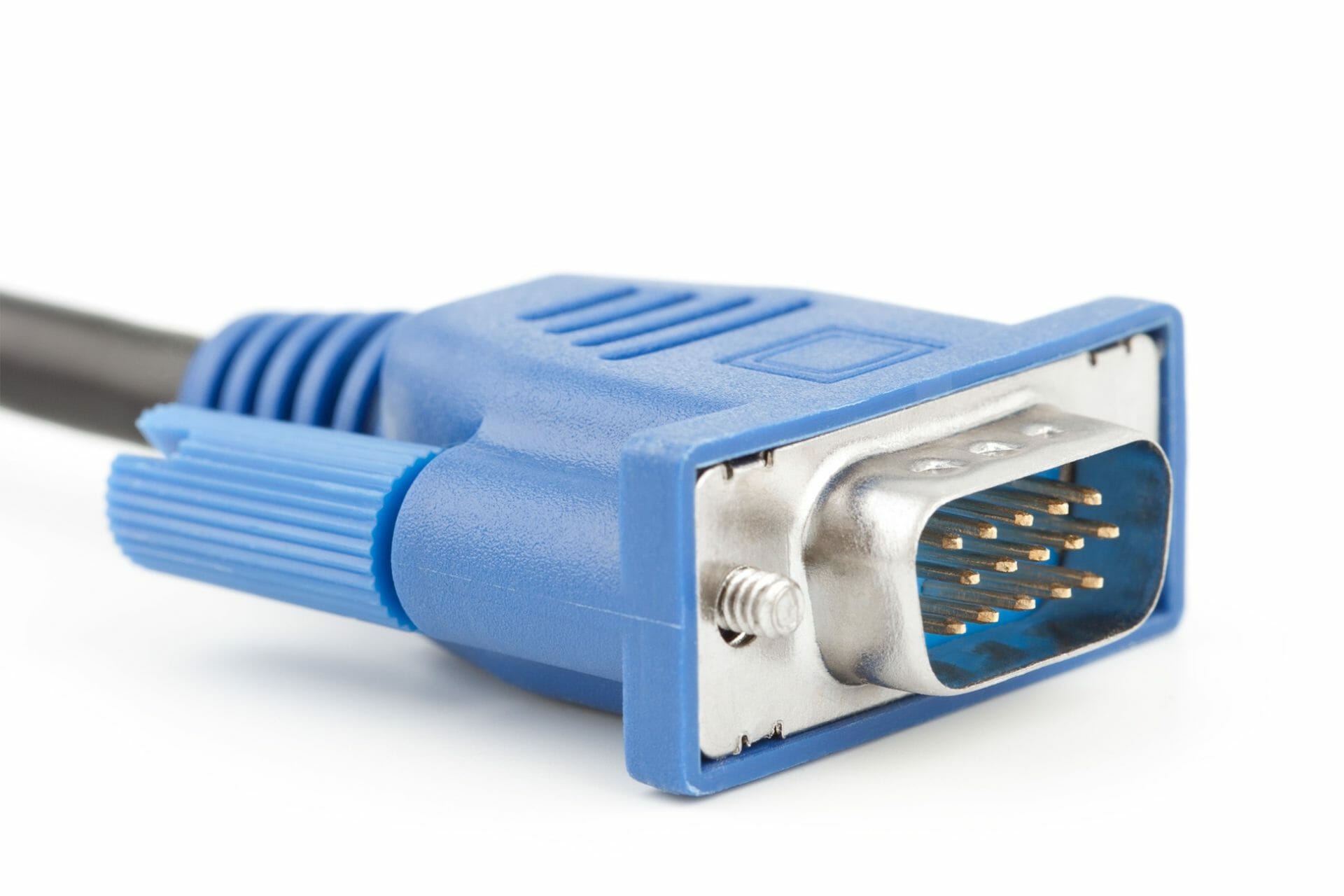 DVI is a standard interface designed for higher resolutions transmission in an LCD monitor, video graphics cards, and projectors. It transmits uncompressed digital signals from the PC to the external monitor(LCD monitors). You'll mostly find this cable connection in video cards.

DVI cable transmits both signals digital and analog. Therefore, it's suited for all video transmission needs. It has both male and female connectors.

What are the DVI cable formats?

DVI has three formats listed below. 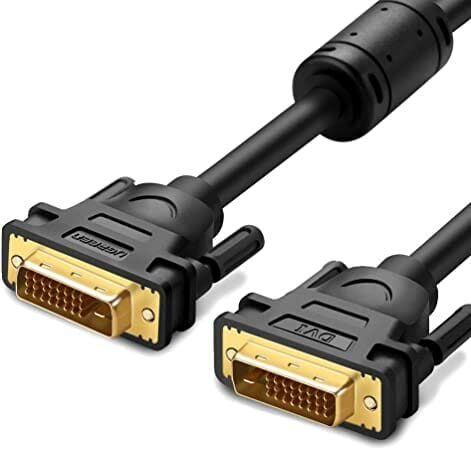 HDMI cables are the interface that transmits HD quality video and audio signals from a PC to an external monitor. It was discovered by Video Electronics Standards Association (VESA). You can use the HDMI connecting cable to connect your PC to the monitor and other external devices. It transmits uncompressed signals.

HDMI connector has a high bandwidth range of up to 48.0 Gbps.

HDMI cable versions are listed below. 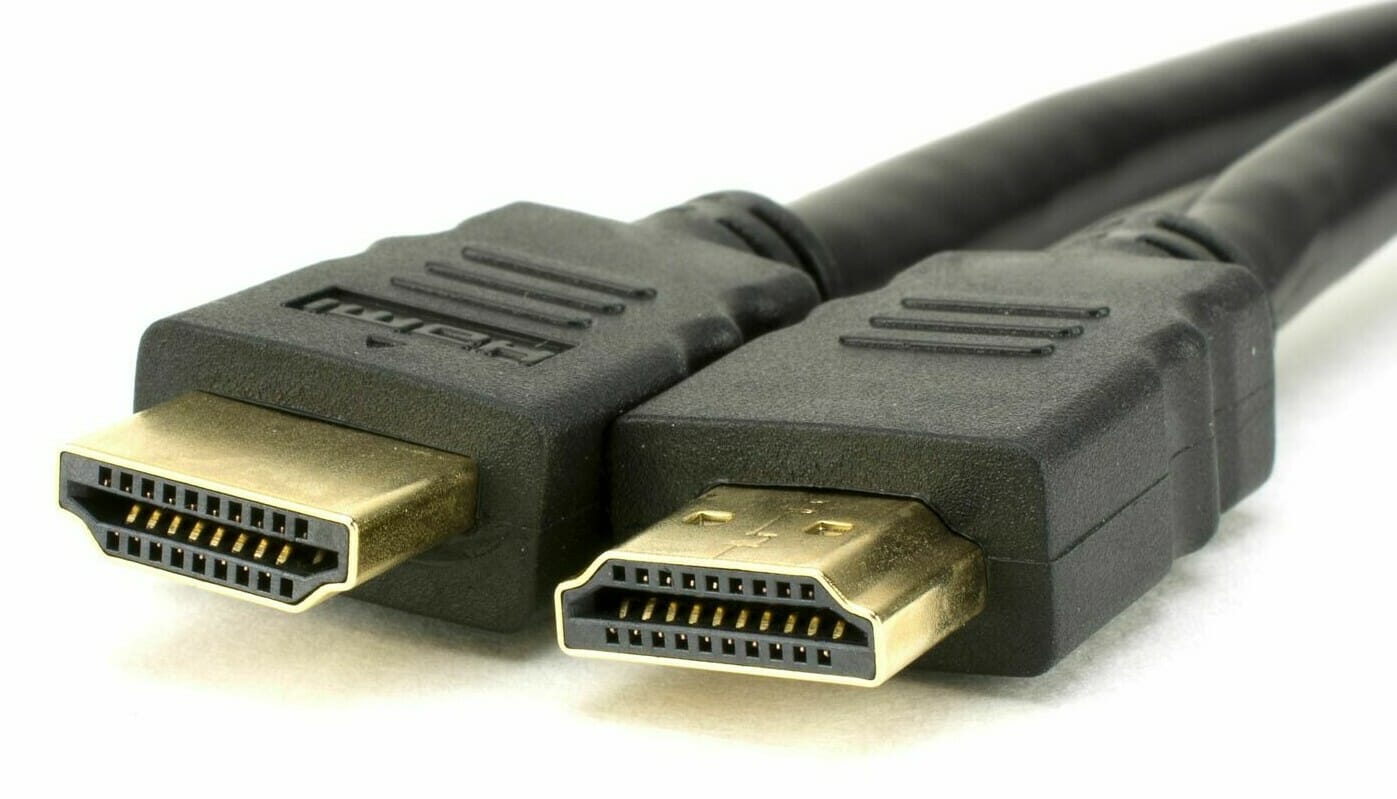 DisplayPort is a high-performance digital video interface that connects and transfers signals from a source computer to a monitor. The DisplayPort transmits both signals, video, and audio, using packetized data.

DisplayPort is a display interface with packetized data transmission. The interface is similar to the HDMI connector in the outwards appearance. It has a wide bandwidth of up to 80 Gbps (DisplayPort 2.0) 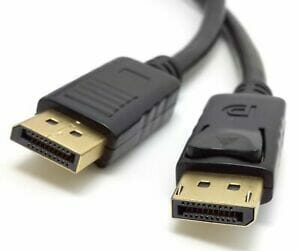 Universal Serial Bus USB cables have become more common in our markets. You can use them to connect the PC with peripheral devices like mice and printers. They are also used for file transfer without forgetting their application in charging devices like phones. Their small size makes them compatible with small devices like laptops, tablets, and mobile devices. They are also easy to walk around with.

USB Types are listed below.

USB-C further has several versions, as listed below. 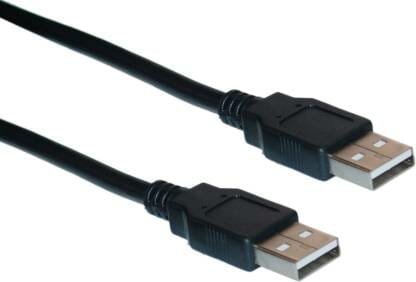 Thunderbolt is a standard interface used in Intel-based systems. It was established by Apple and uses thunderbolt technology. This cable has an improved data transfer rate due to its high bandwidth. You'll most likely come across Thunderbolt cable in iPads, iMac, or MacBook PCs.

The Thunderbolt cable transmits both audio and video signal. It also transmits data between devices.

Thunderbolt cable types are listed below. 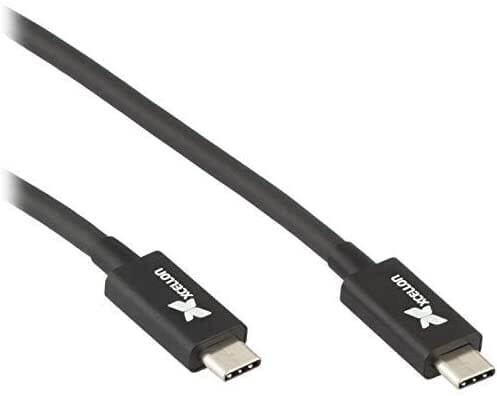 The component is an audio interface used for analog audio transmission. They are not commonly used, but you'll see these cables on some monitors. It has three connectors; red, green, and blue. It has three pins together. You can use it to connect your monitor with DVD players. 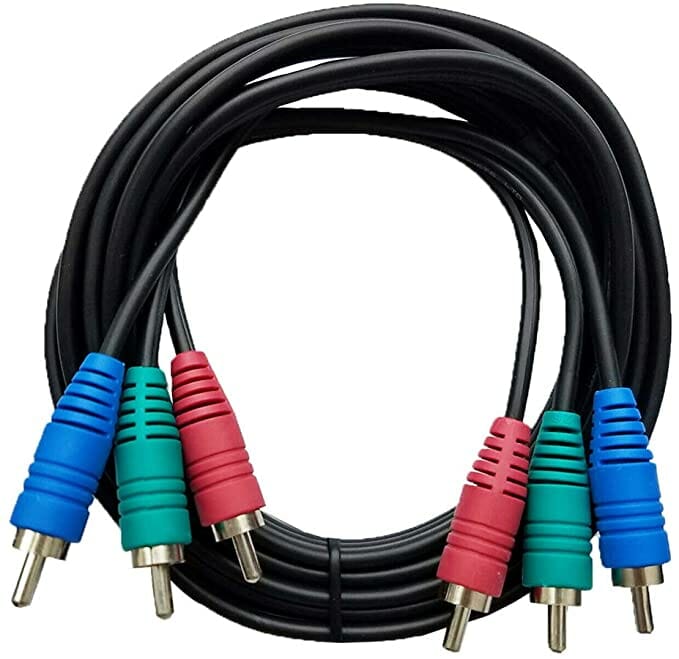 Composite is a set of three connectors used to transmit video signals between two devices. The cables are colored red, white, and yellow.

This cable only transmits analog video signals, meaning your videos will be limited to standard definition.

You can use this cable to connect ancient gaming consoles and set-top boxes. 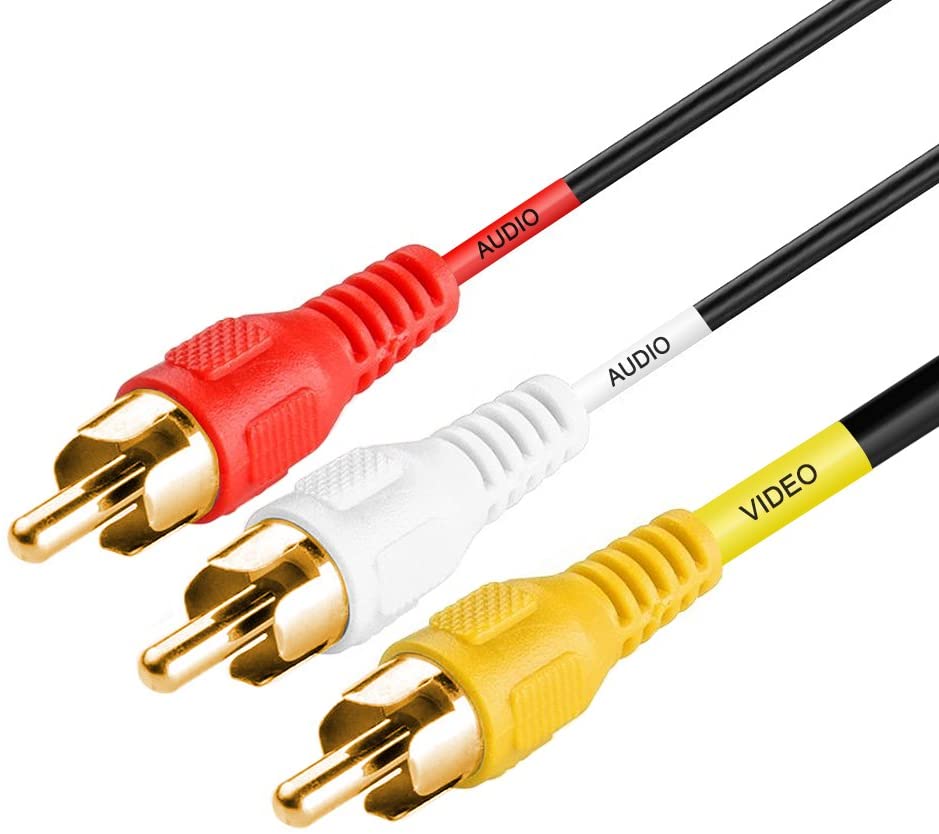 What Are the Best Monitor Cables for Gaming?

The best monitor cable type for gaming is the cable that is compatible with both your monitor and your gaming console or PC. However, to ensure top performance and the best gaming experience, it would be wise to go for a cable with a high bandwidth range. The cable should also support high display resolution and refresh rate.

If you are gaming on the latest consoles like Xbox Series X or PlayStation 5, you'll need to have HDMI 2.1 cable and a monitor with an HDMI port too. This cable has high bandwidth (48 Gbps) for the best gaming experience. It also supports a 4K display resolution at a 144 Hertz refresh rate, ideal for most fast-paced competitive games. The cable will also allow you to use eARC. It is still a great deal when gaming on a laptop or PC.

DisplayPort, version 2.0 in particular, is a killer when it comes to gaming. Its high 80 Gbps bandwidth is the real deal. Besides, it supports a 4K display resolution at 240 Hertz refresh rate. How on earth will a game lag with such features present?

However, if you're gaming on an older monitor, you can use the VGA or DVI cables. But, I recommend you go for the DVI as it transmits digital video signals, unlike VGA, which transmits analog video signals for video transmission only.

Older monitor cable types, such as VGA, only carry analog signals rather than digital ones, necessitating conversion both before and after transmission. Additionally, the resolutions and refresh rates that they support are constrained.

This also applies to older digital cable types like DVI and Component, which can only transmit video at a maximum resolution of 1080p (1,920 x 1,080). The majority can just send the visual signal and require an extra wire to handle the audio.

In contrast, more advanced connectors, such as HDMI 2.1 and DisplayPort, may send both audio and video over a single link. Additionally, they enable low frame rates at resolutions as high as 16K when employing Display Stream Compression, as well as high frame rates at 4K. They can also handle contemporary audio features like Dolby Atmos and contemporary visual standards like HDR.

Despite not having quite as much bandwidth as the most recent HDMI and DisplayPort standards, USB-C and Thunderbolt 3 and 4 are incredibly versatile because they can handle audio, video, high-speed data transmission, and in some cases, power transmission to connected portable devices, all through a single cable.

They are much more capable than any of the outdated monitor cable types that are still present on some legacy devices because they can even do it concurrently.

The different monitor cables have different bandwidth ranges. Besides, they are different when it comes to signal transmission. HDMI cable, especially the high-bandwidth HDMI 2.1 is, and DisplayPort 2.0, are best used for gaming.

On the other hand, USB-C is widely used for PC and smartphone connection and for charging devices. Thunderbolt, especially Thunderbolt 3, has fast data transfer and connects to the PC or monitor through the USB-C port. VGA cables and DVI are less preferred because their signals are analog.

1. What kind of cables are used for monitors?

Due to its popularity and low cost, HDMI has become the de facto digital standard. The same cable can also serve as an audio connection for monitors with built-in speakers because it contains sound data as well. Although HDMI monitor wire types have 19 pins on each end, they are substantially smaller than VGA or DVI.

Digital Visual Interface, or DVI, provides a noticeably crisper, better image than VGA. Because it can transport both digital and analog signals, it is a special connector. Other formats like HDMI and VGA are also simply convertible to DVI.

3. Which is better HDMI or DisplayPort?

Despite the fact that HDMI 2.1, which outperforms DisplayPort 1.4 in terms of capability, has been released, there are still few displays that support it. Several vendors unveiled HDMI 2.1 displays at CES 2021, so expect that to change soon.

4K is not supported by older connectors like VGA and DVI connectors. 4K at 60 frames per second is supported via DisplayPort 1.2, HDMI 2.0, Thunderbolt 3, and some USB-C interfaces.

When comparing VGA vs HDMI for gaming, HDMI comes out on top. Greater resolutions, a higher refresh rate, HDR, and audio are all supported with HDMI. On the other side, 1080P at 60 Hz gaming on VGA is okay.