How nice is it to sit in front of a 50-inch Sony Bravia and throw a race with your comrade-in-arms all day?

How chic it is, to hold your Joy-Con and control your characters on an LCD monitor miles away while sipping a Starbucks coffee?

Yet, in a sad reality, your house doesn’t have a TV and your LCD is broken from a ball shot through the window.

But, wait a minute, suddenly the Macbook which lies still on the table catches your sight! Then you realize you have no idea how on earth to connect Nintendo Switch to your gaming laptop.

Then, you have come to the right place my friend, because this article will recapitulate all the hacks that you can envisage to capture your Nintendo Switch on a laptop screen.

Connect Nintendo Switch With Your Laptop Via Capture Card

Actually, capture card is the sole answer for our initial query: “How to connect Nintendo Switch to your laptop?”. Because the digital display interfaces on laptops and the ports on Nintendo Switch’s dock are both output ports. And you know, magnets of the same poles repel each other.

Laptop displays are connected to the GPU via an eDP (or LVDS in older models). The GPU can output images/video via the displays or HDMI/Thunderbolt 3.0/VGA port with the input data from game consoles like the Switch.

If there’s no adapter or cable to output the Switch on another output device, then how come game streamers still display a game of Super Smash Bros. or Mario Kart 8 Deluxe for millions of their followers to watch day by day?

That’s why we’re here, to introduce you to the world of capture cards.

What is a capture card?

A capture card is used to encode game signals into digital input information and post it on the Internet. The assistance of USB-C to HDMI adapter, USB3.0 or USB-C also makes it possible to stream and share what you’re playing on game consoles like Nintendo Switch with millions of followers and comrades on social media platforms.

Operation principles of a capture card

Capture cards would receive game consoles’ signal and convert it into digital data. The streamline continues to flow into the laptop via a USB3.0 or USB-C cable connecting the capture card and your laptop.

Good for low budget gamers and beginners. This device requires no additional hardware setup work and offers an amazing package featuring HDMI cable to capture software. You won’t have to worry about disrupted or unrecorded footage as it also possesses a time-shift feature. 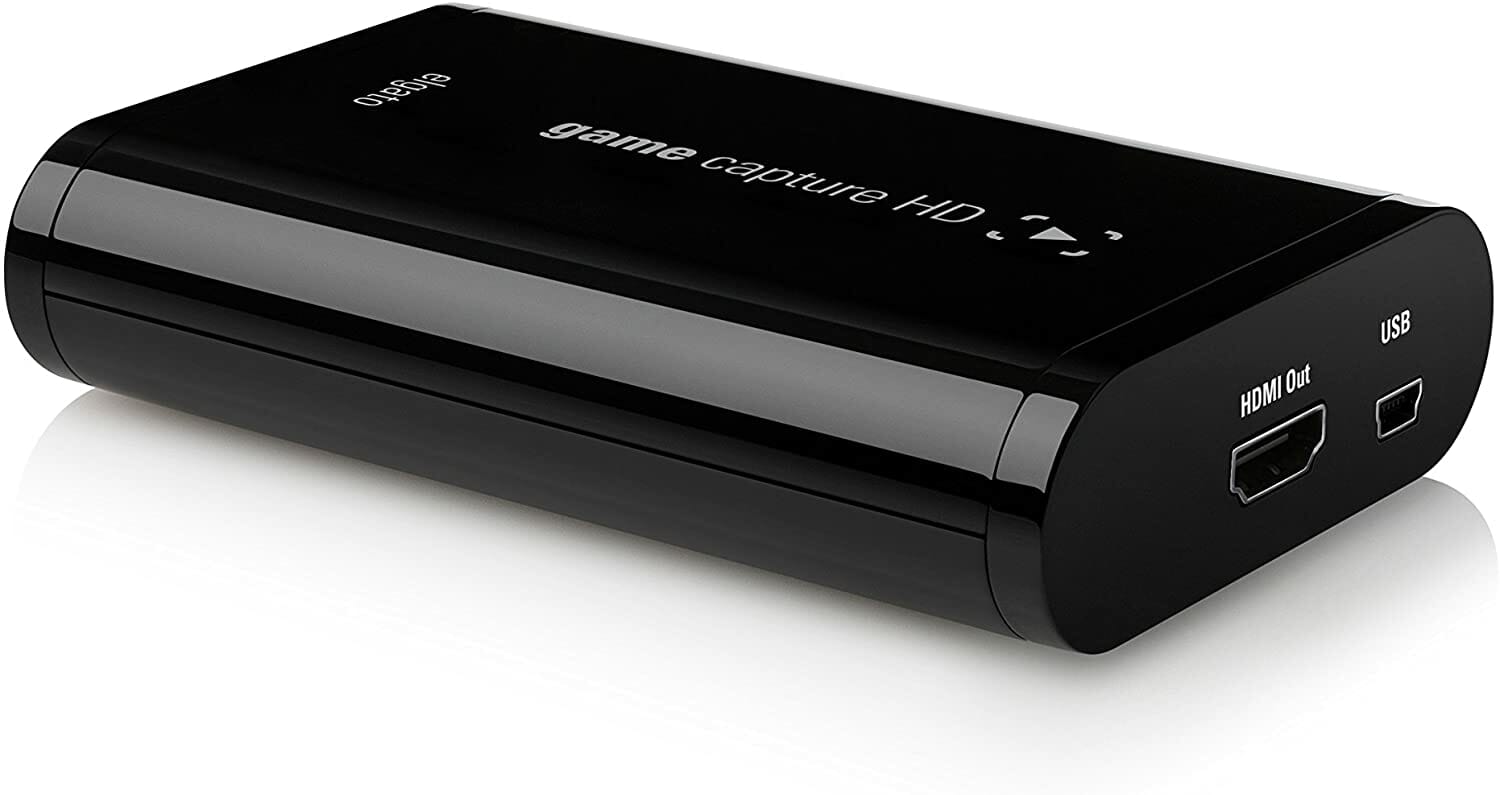 Updated from the first HD version, this machine appears smoother in streamline and sharper in visual with a matte black finish. It promotes 1080 resolution at 60 fps frame rate, just like your games have hopped out of the Switch screen to your laptop display.

However, as it supports such a high level of resolution, users have feedback that they stumbled on some stutters in both footage and audio flashback. You may consider using a 3.5mm audio cable that’s allowed to play sound through speakers.

A quick tip: Don’t forget to buffer your cam by 700m 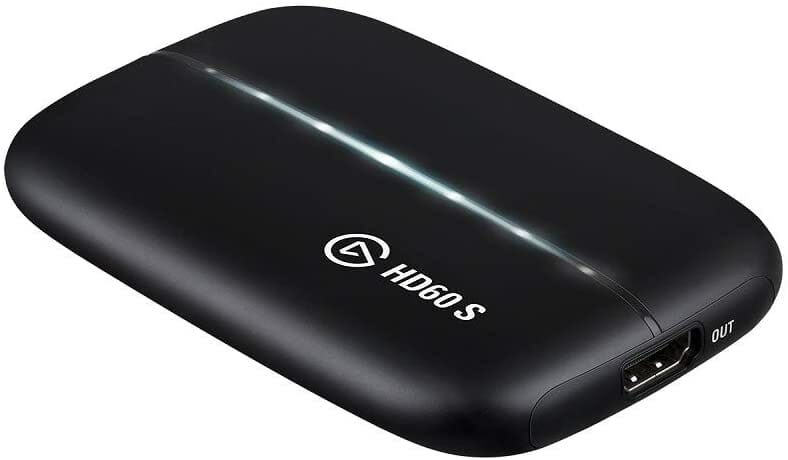 With streamlined curves and salient LED status strip, Elgato HD60 S is such a haute couture luxury in design. But the killing part still lies beyond, as it reinforces an exquisite 1080p60 quality with a reversible USB-C and a pumped-up USB3.0 connector that share your Instant Gameview with an external capturing solution for the first time.

Now you can plug’n’play alongside millions of your followers on Twitch or Youtube with almost zero latency.

You thought it was the end? Then be prepared to get exposed to a full package of instant and flashback recording, instant creation, live commentary to experience an Instant You.

They are Tweedledum and Tweedledee with Elgato. They’re also second to nil with the Live Gamer Ultra – GC553 or C985 Live Gamer HD.

If you purchase from the showroom or authorized website, you’ll also be equipped with a HDMI 2.0 cable, a Type C to Type A Cable, a Quick guide and a CyberLink PowerDirector 15 Product Key Card (a 4K video editing software). 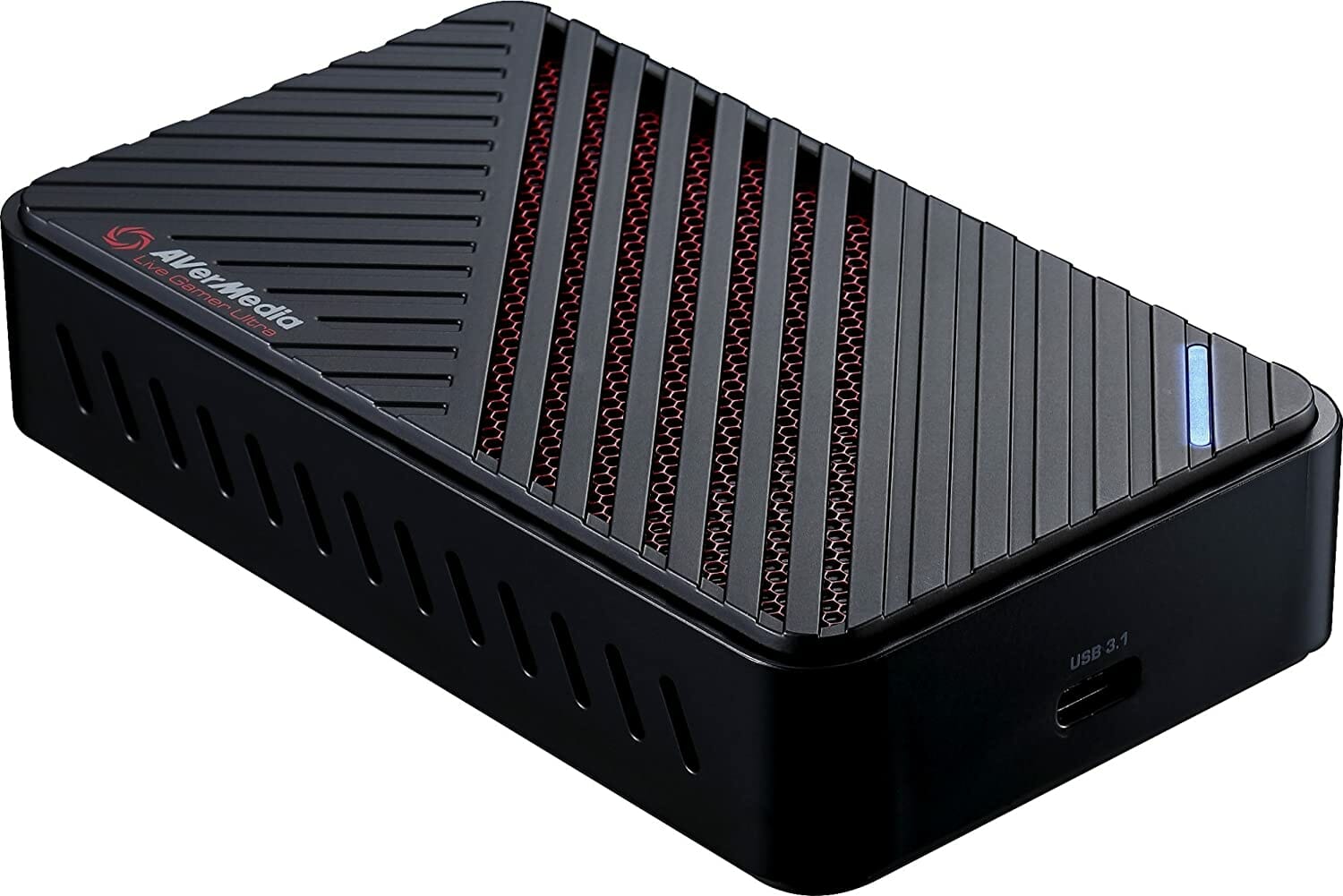 Before we proceed any further, you need to install a game capture software to capture and stream the Switch encoded data live after they are fed into the capture card.

Go to Elgato main website and download the free version application. You’d still be allowed to record HD videos without having to pay some extra amount for premium.

Let’s move forward by attaching the Switch into its dock to prevent unnecessary scratches, since you will use the laptop as a monitor the whole time.

There you go, enjoying some HD gaming moment just as you did with the TV. Yet, you must accept the fact that there will be some artifacts as well as footage lag due to the encoded (not original) video feed. AVerMedia LGX USB3.0 is an ideal port with almost zero latency.

However, if you can’t deal with this 3-5-second delay, or you just simply do not want to spin your head around a HDMI capture card that costs over 100 bucks, then the only solution for you is to play the PC versions of Nintendo on Microsoft App Store, the reason why you have to bid farewell to Pokemon, Super Mario and Animal Crossing. 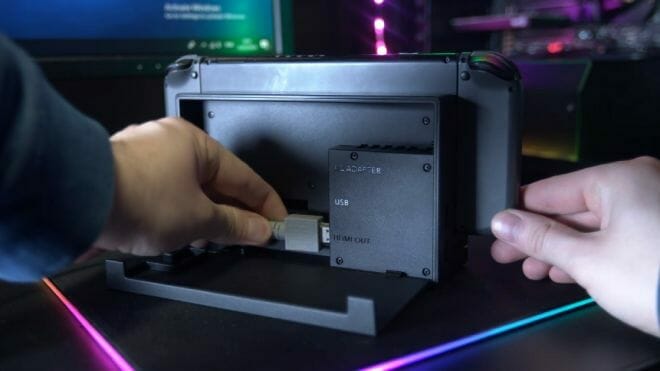 There are a total of four ports on the Switch’s dock, 1 AC Adapter Port (for power adapter), 3 USB Ports (for charging purpose) and 1 HDMI-out Port.

The most optimal option for you is to buy a new separate HDMI monitor for about USD60 or just go to your friend’s TV and rescue your time and money.

Connect Nintendo Switch With Your Laptop Via Laptop’s Ports

The biggest query would be: How to convert laptop’s HDMI-out ports to HDMI-in? Well, we regret to inform you that there’s no prominent solution. 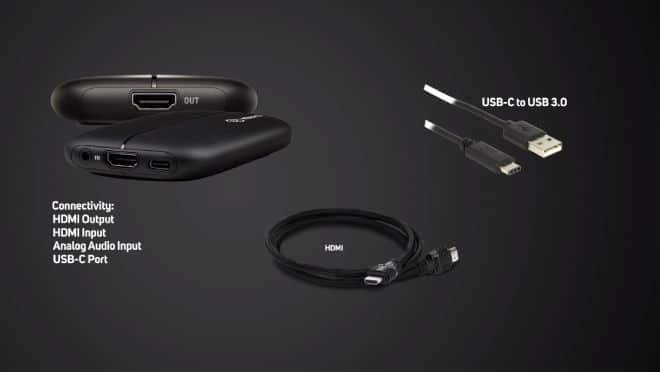 The built-in graphic cards in laptops only allow one to output video and audio to other external devices, not vice versa. HDMI ports on laptops may be bidirectional but just for audio only.

Apparently, if you want a laptop to know how to deal with incoming data, you must write a new software program and assemble a new piece of hardware to adapt the output data sources to USB, FireWire or potentially Thunderbolt. Not to mention, this software should also support visual display and audio synchronization.

It’s a fact that 99% of the current laptop lines only have a HDMI output port, not vice versa, and an USB type A/C port.

They may be a better fit for game consoles like PS4 or Xbox to be hooked up with, but not in the case of Nintendo Switch.

The Switch is specifically designed for big monitors like TV screens and PCs, so you don’t need to worry about port and cable. As a result, only capture cards which transmit games’ signal, via a similar mechanism used by game streamers, can deliver the Switch footage to any device as you wish.

If you have any other query than how to connect Nintendo Switch to your laptop, feel free to post below the comment section and we’ll share with you some pieces of our expertise as soon as possible! Make sure you have an adequate laptop.  Admittedly, you probably don’t need to drop more than $1000 for a laptop, unless you’re really into gaming. Spending between $400-$1000 for your switch is ideal.