With their vibrant colors and relatively constant picture appearance from multiple angles, IPS displays are suitable if your focus is on accuracy. When you can't afford the pricey nature of these monitors, LEDs present a budget solution.

Not only do you spend less when shopping for LED displays, but you also spend less in terms of power uptake. Thanks to their less demanding operation, you also don't have to worry about overheating issues.

But which of these monitor panel types here best describe your next monitor? Dive in for expert advice!

Is IPS Better Than LED?

The benefits of using LED TVs are minimal energy consumption, a long-lasting backlight with pictures being bright. IPS displays offer more image accuracy and have better color reproduction in small viewing angles. In short, LEDs are cheaper, though the advantage of an IPS screen is better picture quality. Having said that, Samsung's Quantum Dot technology could boast of dramatically enhanced color compared to IPS panels.

Before we look at the detailed comparisons of these panel technologies, which of the two is better for gamers? And this earlier post will take care of your business side of things! 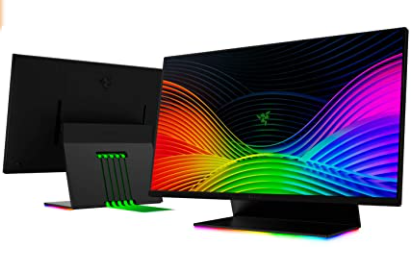 Are IPS Monitors or LED Monitors Better for Gaming?

Although LED panels are excellent in competitive gaming, IPS gaming monitors have various tricks, like better image colors than other technologies, including TN and VA panels. If you want to play while getting the most accurate color depiction, choose IPS and make sure to go over our review of top-shelf 32'' gaming monitors, this affordable option from Dell, or these ones best suited for your Xbox One X.

What's more, In-Plane Switching monitors maintain color consistency even when looking at them from extreme angles. If you prefer playing multiplayer games with your friends, the maintained picture precision across an extensive sitting arrangement is essential. Apart from picture, sound is essential to gaming, so check out these top monitors with speakers. And if you don't want to break the bank, cheap G Sync monitors from this post are decent alternatives.

IPS vs. LED Monitors – What Are the Differences?

LED and IPS monitors (see also QLED) have excellent attributes with disadvantages as well. Before looking at the differences of screens featuring the two technologies, here is a look at the LCD (Liquid Crystal Display) technologies and also a LED vs LCD comparison.

IPS stands for In-Plane Switching, and its screens have better image quality than Vertical Alignment and Twisted Nematic panel types.

The graphics on IPS displays are typically detailed and vibrant due to color accuracy.

LED (Light Emitting Diode) is a type of backlight technology in which the pixels light up. Many people confuse the difference between LED  and LCD displays.

An LED monitor is a type of LCD monitor, and while both utilize liquid crystals for picture formation, the difference lies in LEDs featuring a backlight.

The benefit of using LED panel technology is how bright the displays are while still maintaining an efficient energy consumption lower than other screen technologies.

Now that you know what LED and IPS are, how do the two compare?

An IPS display provides a much better image than most LED displays because of the clarity and crispness, irrespective of your sitting position.

On the other hand, an LED monitor shows less reliability and accuracy in color contrast. You also get a limited viewing angle meaning that you'll only get the best quality when sitting directly in front of the display.

Monitor response times refer to the durations screens take to adjust from one color to the next. Response time differences are more conspicuous when playing fast-paced titles like CS: GO, Fortnite, and Battleground.

If you need LCD monitors with a quick response time, consider an LED display panel using either VA or TN technology. Such an LCD screen typically offers a 1ms response time. However, remember that these monitors tend to have smaller viewing angles and inferior image quality than an IPS monitor. Regardless, you can still get a considerably good performance when planning quick-action games provided you sit directly in front of the screen. In that case, vertical monitors from this article may prove a viable option.

LED and IPS monitors vary immensely in hue and brightness. IPS provides wide viewing angles without the changing of your screen's color.

On the other hand, LED monitors to focus on the brightness of the visuals. For this reason, you'll notice a difference in the screen's coloration based on your sitting position. Viewing LED monitors at particular angles may result in the appearance of washed-out displays.

In-Plane Switching screens and LED monitors, while different, incorporate other display panels to cater to their disadvantages.

Below are some combinations of these two technologies:

Although LED monitors provide brighter screens, their power consumption is much less than IPS panel technology. That explains why they are a favorite Liquid Crystals Display technology amongst those looking for affordable electronics.

Because IPS monitors take up much power, they release more heat than their LED alternatives. Despite LED display monitors providing bright pictures, they produce relatively less heat than monitors with IPS display technology.

The cost of a monitor using IPS screen technology is approximately $100 or more, depending on whether the panel infuses other technologies like a TN panel or another type of LCD.

Notably, mid-range IPS monitors usually go for more than high-end LED monitors. When it comes to LED monitor prices, you can get excellent selections going for under $200 (see here), $100 and even $50, depending on your model and the included attributes.

Which Monitor Should I Buy?

While both offer superb monitor selections, the differences between IPS and LEDs make one a better option for you than the other. Apart from these two, there are other display types to choose from so it can be hard to decide which suits you best. Nonetheless, here are vital questions to answer before deciding.

Is IPS Better for Your Eyes?

Yes, they are less likely to cause eye strain than LEDs. With them, you get decent color representation and excellent contrast ratios. For these reasons, they minimize the effort your eyes take to decipher things. Some of these panels operate even at a refresh rate of 280Hz to reduce input lag and combat unpleasant screen effects like tearing that may lead to straining - click here for the best monitors for eye strain.

Conclusion: IPS vs. LED Monitors- Which is Better

Both IPS and LEDs have critical upsides that might be key to your application. Irrespective of the technology you prefer, the trick is identifying which coincides best with what you envision for your monitor.

Now that you have the dissimilarities between IPS and LED, which monitors suit your needs?

In sum, IPS monitors are fantastic if you have a more flexible budget and you prefer intensive viewing angles with impressive color reproduction and image accuracy. Something to remember is the increased overheating potential because of the relatively higher power consumption.

An LED monitor might be your go-to alternative if you want to spend less. Besides, you can pick from multiple options featuring LCD and TN panels to circumvent some shortcomings synonymous with LED displays. What's more, their performance is more reliable.

Good luck with your pick!

1 thought on “IPS vs LED | Which One Is Better For Your Needs?”