Choosing the right gaming monitor can often feel like a challenge. After all, there’s a lot of technology at play. But did you know that you can easily determine which one is right for your needs by understanding the differences between IPS vs TN? That’s right, many times it comes down to knowing your hardware. For example, are you aware of the response time of your monitor? Or of the anti aliasing methods it uses? Also, do you have a HDMI cable that can get you 144 Hz refresh rate? Well, today, I’m going to make sure you are armed with all the information you need to make the best educated decision. In the following sections, I will reveal what’s so great about IPS and TN monitors (see VA vs IPS), as well as anything you might want to avoid.

IPS vs TN Monitors - Which One Is Better for Your Needs?

We’re going to put each monitor head-to-head to help you determine which one is right for you. For gaming enthusiast, there is some dissension relating to TN vs IPS gaming differences.

But fear not, because I am going to clear up everything and declare which gamer each monitor is better suited for.

I’ll show you what makes TN panels the cream of the gaming crop, and why IPS is a visual paradise (see this great budget gaming pick from Dell).

In the end, I’ll break it down in the simplest of terms to help make your decision easy. If you’re interested in seeing what some of the best gaming monitors look like, you’ll find plenty in this post.

So with that, it’s time to see who comes out on top in the battle between TN vs IPS. 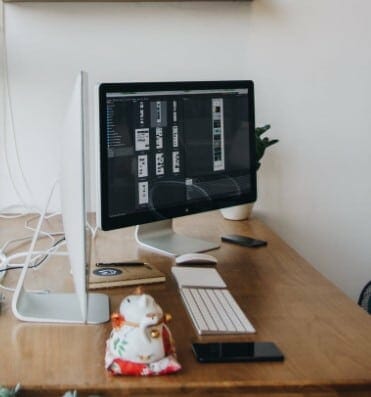 What Is a TN Panel?

TN, or Twisted Nematic, are some of the most popular and commonly-used monitor panels available. They are generally the more affordable of the two, as you can see here. So, what is a TN display best known for?

Simply put, performance. For many gaming enthusiast, TN is the only way to go. But why is this? After all, TN monitors aren’t exactly known for their visual clarity.

It all comes down to the advantageous aspect of using a TN monitor. You see, TN panels are capable of some truly slower response times and refresh rates so you can benefit from 144Hz or 240Hz monitors.

This translates to smooth motion on-screen, as well as less input lag. Games running at high frame rates tend to look absolutely stunning on TN panels. And as any competitive gamer will tell you, input lag is a big no-no.

Sure, images and colors aren’t nearly as clear as they are on IPS panels. But to most gamers, that competitive edge is all that matters. For gaming enthusiast or those on a tight budget, TN monitors are the best choice. But surely there are some benefits to using an IPS vs TN panel, right? Let’s move on to find out.

What Is an IPS Panel?

IPS, or In Plane Switching, was essentially created to improve on the areas that the TN panels lacked. So, what is IPS monitor best known for? With this technology, you’re getting much better vibrant colors on-screen, as well as wider viewing angle, especially with ultra wide monitors and even with vertical monitors. And we also answered the question "what are vertical monitors used for?"

IPS monitor typically makes them ideal for gamers or users who often view their monitors from the side, whereas TN panels are quick to lose their visual clarity when viewed from anywhere other than straight on.

If you like to have friends over or play together with siblings, you’re better off using an IPS monitor vs TN. Each gamer can play from anywhere in the room and still see the monitor clearly and vividly.

Furthermore, you can look forward to much truer blacks and better contrast. As a result, your images look more realistic. But all is not perfect in the IPS (In plane switching) world. As with TN panels, there is a trade-off to IPS’s visual appeal.

Unlike TN panels, an IPS display typically has a slower response time. Not only that, but the refresh rates aren’t as impressive, either. What does this mean for you?

Well, in short, your beautiful games won’t move as fluidly or respond as snappily as they would on a TN panel. 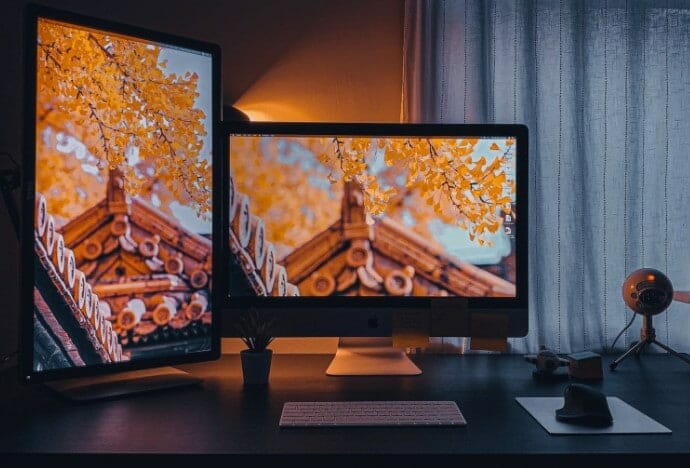 TN vs IPS Monitors: The Differences

Now that we have a better understanding of what each panel technology does, what’s the difference between TN and IPS?

TN panels struggle maintaining their clarity when viewed from the side. With such limited viewing angles, TN panels aren’t really suitable for side-to-side gameplay.

And yet, while you won’t find the best color representation on TN panels, they do display motion incredibly well.

Add in less input lag, and you’re looking at the decisive winner among competitive gamers around the globe.

But what about an IPS panel? Well, pretty much the opposite is true. Those who aren’t interested in playing against other gamers online will likely be just fine using an IPS monitor.

Motion isn’t portrayed quite as smoothly, but colors are vivid even if you have a budget monitor under $400 or under 200 dollars, and at least you can see the monitor clearly from any angle. When it comes to using a TN panel vs IPS monitors, the latter is your best bet for extreme angle.

As you can see, both have their pluses and minuses. What works best for you might not work well for the next gamer.

Response time is basically how fast your monitor can talk to your gaming console or PC. The lower the response time, the less likely you are to experience the dreaded input lag we just talked about.

Serious gamers will want to invest in a monitor with the lowest response time available. And, as it currently stands, that comes out to a blistering 1 millisecond.

As you may have already guessed, a higher response time leaves the door wide open for delayed communication between the gaming monitor and gaming system. This, in turn, can lead to losing caused by unnecessary lag.

When searching out the right monitor for your needs, you’ll see response time listed as something like “1ms”, or “5ms”. The lower the number, the better the response time.

This is simply the verbiage used to describe how well you can make out the images on the monitor when viewing it from any direction other than straight on. Many IPS monitors boast viewing angles of 178 degrees.

This translates to pretty dang good. If it is important for you to be able to clearly see your monitor from across the room and on the end of your couch, for example, you’ll want to invest in an IPS monitor.

As we’ve already mentioned, TN panels are the lesser of the two monitor types when it comes to true color production. IPS panels are known for their true-to-life colors, making watching movies a big hit among movie fanatics.

Of course, this translates well for gaming, too. If you’re generally a single-player gamer who enjoys getting immersed in your virtual world, an IPS screen will yield the best results.

But for gamers who prefer multiple players, a TN panel will be more reliable in the performance department. Sure, your colors will take a bit of a hit, but you won’t have to worry about blaming anyone but yourself if you lose.

Contrast is highly important if you’re trying to reach the truest blacks. Rich contrast allows your monitor to display some amazing depths in color, with the non-color black included.

If you often play games that have dark settings, you’ll want to invest in a monitor with excellent contrast ratios. If not, your blacks will look more akin to a piece of slate.

If you’re trying to save as much money as possible, you’re better off investing in a TN panel monitor. Many manufacturers of budget-friendly monitors use TN panels, as they are cheaper models to produce.

Conversely, IPS monitors are usually the pricier of the two. But with that higher cost comes better visuals and improved viewing angles.

When it comes to IPS vs TN for gaming experience, it all depends on the type of gamer you are. If you play a lot of online games and competition is important to you, TN panels are going to give you the best outcome.

However, inviting friends over for two-player games will likely have you sitting uncomfortably close to one another as you battle for viewing supremacy.

IPS panels fix this issue, but their response times and refresh rates struggle to hang with the exceptional performance of TN panels.

So, in the battle between IPS vs TN, which is the better of the two? As you’ve probably already surmised, it’s subjective and comes down to personal preference. That being said, it’s easy to determine that TN panels are ideal for competitive gaming where every second counts.

For those who simply want the best visuals on the planet, IPS is right up your alley. Your colors will look rich and vibrant, and contrast is incredible. Basically, TN panels are all about the performance, while IPS is all about the picture.

With all of the distinctions discussed, it's clear that IPS gaming monitors are the best of the best, featuring lightning-fast response times, wider viewing angles, and brilliant color reproduction. If you are planning to have a new gaming monitor purchase, TN monitors are still excellent for gaming and will provide you with an advantage when competing in competitive games for a much lower price. We also recommend you to take a look at these white gaming monitors which are ideal for every enviroment.

2. Is IPS really better than TN?

Each monitor panel type has its own set of benefits and drawbacks. Consider carefully what you want to accomplish with the display. Those looking for a screen with very high refresh rates and minimal motion blur will quickly come across a TN panel. Those seeking the best image quality should opt for an IPS display.

TN (Twisted Nematic) can be quite attractive. Additionally, it can look awful. In terms of color quality, consider a spectrum with some overlap. The best TN displays outperform the worst IPS displays. We may digress a little here, just to mention that Samsung's Quantum Dot technology has proved to have the best color accuracy so far. IPS panels, though, still have better viewing angles. TN panels are cheap and have fast response times, but have inferior image quality and poor viewing angles.

In comparison to AMOLED displays, IPS LCD panels have better viewing angles and are therefore better for outdoor use. None of them, however, is necessarily better for your eyes. In other words, both of these methods can be equally hazardous to your eyes. Read more about it in our IPS vs LED review.

IPS technology was developed to address the drawbacks of TN panels, most notably their poor color reproduction and narrow viewing angle range. As a result, IPS panels outperform TNs in both of these categories. IPS panels, in particular, have significantly excellent viewing angles than TN panels or TN models.

2 thoughts on “IPS vs TN | Which Is Better For Gaming and Which For Visuals?” 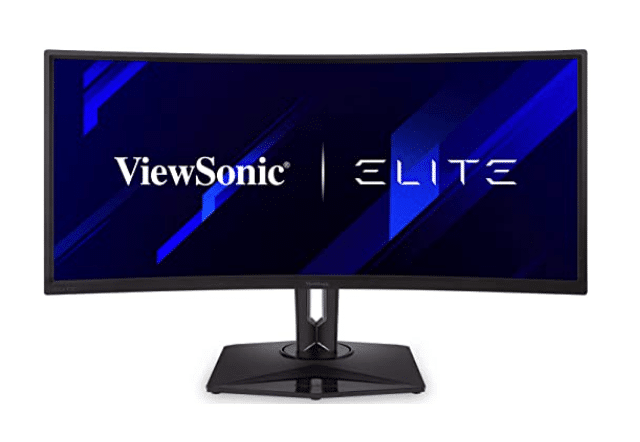